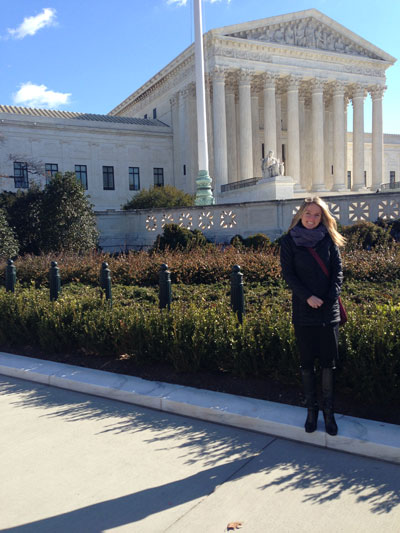 On January 19, 2016, Grand Rapids attorney Britt Cobb of Willey & Chamberlain was admitted to practice before the United States Supreme Court. She traveled to Washington, D.C. for the Supreme Court admission ceremony, which preceded the oral arguments scheduled before the Court that day.

Gerry Morris, President of the National Association of Criminal Defense Lawyers (NACDL), moved for her admission, along with nine other NACDL members. Chief Justice John Roberts granted her admission and she was sworn in before the entire Court.

This admission allows Britt to practice before the United States Supreme Court, including submitting petitions for writ of certiorari and arguing any cases in which cert is granted.

Willey & Chamberlain’s Chip Chamberlain and Larry Willey are long time members of the bar of the United States Supreme Court.

Attorney Britt Cobb has been practicing law since 1998. She began her practice in Colorado before relocating to Michigan in 2006. She has worked exclusively as a defense attorney, representing the accused in criminal cases at the trial level — while also representing individuals in licensing matters, immigration matters, and in appeals at both the federal and state court levels. She has handled appeals in the Michigan Supreme Court, the Michigan Court of Appeals, the Colorado Court of Appeals, the Sixth Circuit Court of Appeals, and the Board of Immigration Appeals.

For more information about Willey & Chamberlain attorney Britt Cobb, please contact us here or call our office directly at 616.458.2212.­­