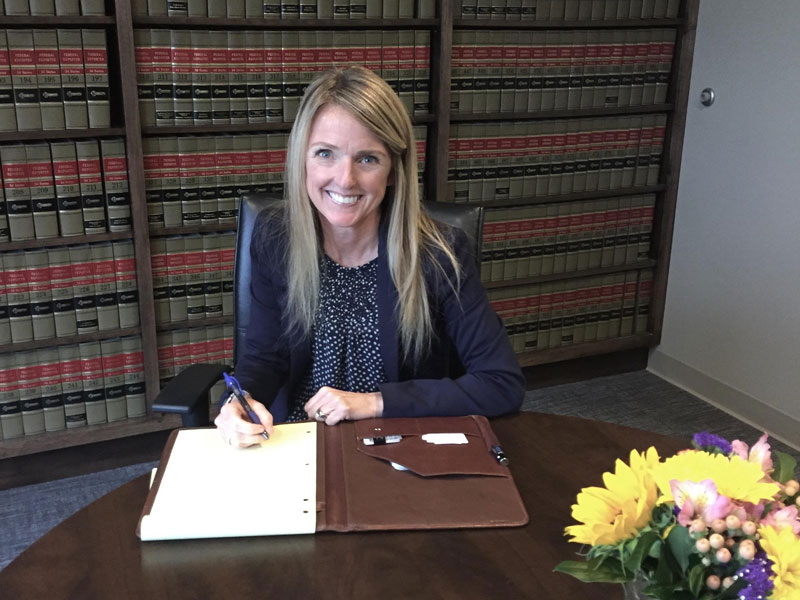 Written by Cynthia Price. Originally posted May 31, 2017 on Legal News

The well-respected law firm of Willey and Chamberlain has expanded its partnership roster from the two founding attorneys to add Britt Morton Cobb, with the firm since 2006.

Joining Charles E. Chamberlain Jr. (who generally goes by Chip) and Larry C. Willey, Cobb will continue her criminal defense practice, which extends to appeals as well as representing clients in licensing matters and at times in immigration cases.

“We do mainly what people consider white collar crime – health insurance fraud, embezzlement, tax matters. We’ll do some violent crimes, but for the most part it’s the white collar,” Chamberlain said. “We continue to do the other cases, though, in part because you learn so much from all different kinds of cases.”

The attorneys at the firm have handled some well-known cases reported in the news media, but for the most part their involvement is covered based on their actions in court, since they almost invariably decline to comment.

“Yes, we’ve had some fairly high-profile case, but they’re just a handful of cases. I think they’ve given up asking us, because we almost always say no comment,” said Cobb.

“While the case is going on, it’s never going to be in the client’s interest to say much,” Chamberlain added.

Chamberlain, Cobb, Willey and the fourth attorney at the firm, Peter VanGelderen, have all been quoted on mLive in the past couple of years.

Most recently, in early May, Chamberlain represented the Herman Miller senior manager who assisted an outsider in fleecing the company of $1.8 million. The manager received very little of the haul, and was sentenced to 41 months.

Chamberlain can also be seen representing Robert Haveman, a former investor who both stole and misinvested funds of the philanthropist Elsa Price Broekhuizen, in a photo accompanying an online article about Judge Robert Holmes Bell’s retirement.

Willey represented former prosecutor Mark Vandermolen in a criminal sexual conduct case, which the prosecutor contended was a relationship attempt gone bad, and a variety of other clients in lesser-known but still covered trials.

Cobb represented one of the defendants in a case earlier this year concerning a scheme to stage accidents in order to defraud insurance companies. And such cases are likely to continue coming to the firm, which has achieved a solid reputation in its 21 years of existence.

Even prior to joining forces in 1996, both Larry Willey and Chip Chamberlain were well-known in the area after years of experience.

Since 1980, he has practiced in the Grand Rapids market, and has been honored by recognition in The Best Lawyers in America since 1993, as well being named a fellow in both the International Society of Barristers and the American College of Trial Lawyers.

Born in Lansing, Chamberlain also has a strong D.C. connection: his father, Charles E. Chamberlain, Sr., was a Michigan representative to Congress from 1956 to 1974.

Also an attorney, the elder Chamberlain  served as legal counsel to the Michigan State Senate judiciary committee and Ingham County Prosecutor before his long stint in the House of Representatives.

“Dad was contemporary with Jerry Ford in Congress. We moved there, although I think they might have rented a house the first couple of years in case dad lost. Times were different then  – a lot of them sleep in their offices now,” says Chip Chamberlain. “It feels like today all they’re doing is raising money.”

He attended Duke University for his undergraduate degree, and then went to the College of William and Mary, Marshall-Wythe School of Law in Virginia for his J.D. After that, he clerked for Chief Judge Wendell Miles of the U.S. District Court Western District, worked for ten years in the U.S. Attorney’s Office, and was with Farr and Oosterhouse for about ten years before teaming up with Willey.

Chamberlain, too, has been honored in The Best Lawyers, from 2000 to present, and as a Michigan Super Lawyer since 2006.

He has served as president of the Federal Bar Association and of the Historical Society of the U.S. District Court for the Western District of Michigan, of which he was a founding member.

Chamberlain was also the president of the Grand Rapids Bar Association in 2009-2010.

“What happened was the year before, the Vice President, Val Simmons, was unable to continue so I ran for Vice President. I guess I made no major screw-ups,” he says, laughing. “It sounds kind of silly, but one of my contributions was that we should have a Christmas social where we don’t charge the lawyers anything, and that’s still around.”

Britt Cobb has Virginia connections as well. She was born and raised there and attended the University of Virginia for a degree in International Relations, with a minor in Japanese.

After that, she attended the University of Denver College of Law, where she was General Editor of the Law Review, and settled there to begin her career. The firm she was with there also specialized in criminal defense.

“When I practiced in Denver, it was much more hot-blooded, very adversarial,” Cobb says. “You didn’t have friends on the other side. Here, we’re all vigorous advocates for our clients, but, well, you run into people everywhere, so you get along.”

Her husband’s job brought her to West Michigan and she practiced a little out of her home, including some appeals work through the State Appellate Defender’s Office, before getting to know Willey and Chamberlain, joining the firm in 2006.

Cobb is a very sympathetic listener and Chamberlain said that has been an asset for the firm. The two discussed a case where Chamberlain had felt there was something a little suspicious during a client interview and sent Cobb to talk to the woman. Cobb unearthed the client’s very complicated story, concerning identity theft and immigration, and the legal case was resolved with good results.

The fourth attorney, Peter VanGelderen, handles the same range of cases as the others, including RICO matters and licensing.

He received his B.A. from the University of Michigan and his J.D., with distinction, from WMU-Thomas M. Cooley Law School in 2009 (where he was an associate editor fo the Law Review and chair of the Mock Trial Board). He then went into private practice before joining Willey and Chamberlain in 2011.

VanGelderen was named a Super Lawyers Rising Star in 2015 and 2016.

Tracy Evans rounds out the team as a paralegal. “Tracy is great. She’s been with me over 25 years,” Chamberlain says, having first joined him at Farr and Oosterhouse.

Chamberlain feels that over the years, the white-collar cases the firm deals with have increased, though he adds, “It’s kind of hard to say. Certainly the government has far more lawyers handling them, but I’m not positive that it necessarily translates to a huge number of additional cases being brought.”

However, Willey and Chamberlain lawyers stay remarkably busy, and, while the partners pay attention to their online presence, neither Chamberlain nor Cobb feels it is their primary source of business.

Cobb, who says she really enjoys the variety at the firm, feels many of the referrals come from other lawyers. “If you need a lawyer, you’re going to call a lawyer friend,” she says. “I think that’s the most consistent way, though there are obviously others.”

“A referral from a former client is a lot less common I think, because a lot of people don’t want to advertise that they’ve had to have a criminal lawyer,” Chamberlain adds, smiling.

For more information about the criminal defense attorneys at Willey and Chamberlain, contact us here or call us directly at 616.458.2212.