Our thanks for 25 years!

By wcladmin October 8, 2021 News
No Comments 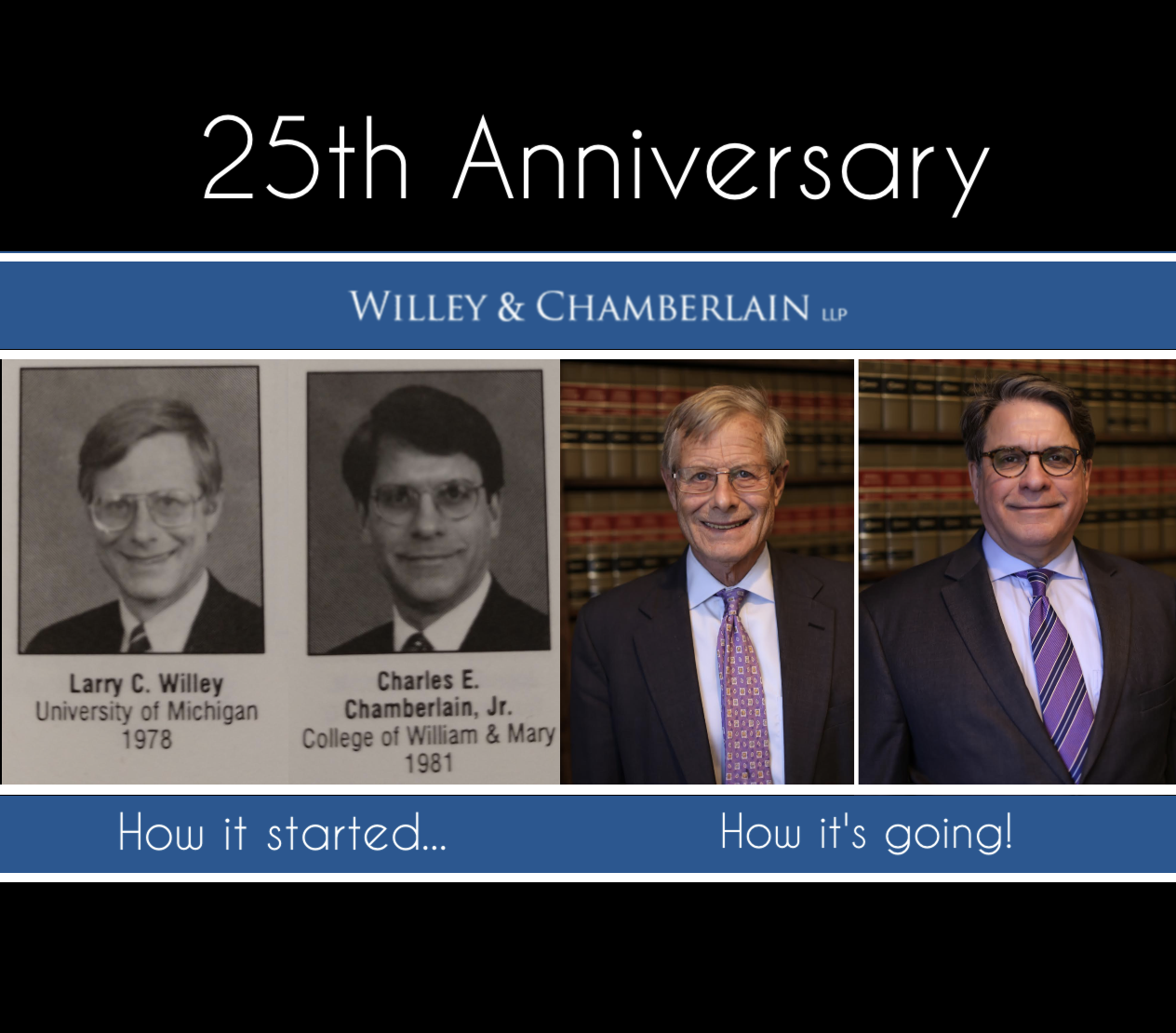 To close out our 25th Anniversary celebration, we wanted to share this gem written by our dear friend the Honorable Hugh W. Brenneman to the tune of Mary Poppins’ Chim Chim Cher-ee.  Thanks to our family, friends and colleagues for helping is reach this significant milestone.  Onward to another great 25 years!

On the 25th Anniversary of Willey & Chamberlain, LLP

(From the Memories of Hugh W. Brenneman, Jr.)

This is the story of Chip

If you’re a bad boy

They wants to meet you

Now as the ladder of life

You may think a crook’s

On the bottommost rung

When you hire these two,

Good luck rubs off on you!

Or drugs you may smoke

But in this ‘ole wide world

There’ll be no happier bloke

From the ‘hood to the boardroom

You may transgress with ease,

If you burgle a bank

Or on the sidewalk you pees,

If they catch you

If you pays their fee

There’s no reason to flee

When you’re hauled into trial

And think your ass is fried

You can relax with Larry

And Chip by your side.

And if Larry is fishing

and Chip’s in the can

Tracy will send Peter or

If you pays enough money

No jail for you!!

When you’re with WC

No where is there

Than them wot sings

On the chim chiminee

In the annals of great Michigan defense attorneys, going back to the days of Clarence Darrow, Larry Willey and Chip Chamberlain stand out, loved throughout the land by the falsely accused.

It is an honor to be invited to pay tribute to the outstanding law firm of Willey & Chamberlain LLP, widely known as the “Attorneys to the Innocent.”

You know, criminal attorneys are a lot like rhubarb pies, you can find a decent one at any large grocery store even if some of them might be a little flakey, but for a real tart fruity one you want to go to a specialty pie store, like the Grand Traverse Pie Company.  Likewise, in the world of criminal defense, Willey and Chamberlain, LLP, comes to mind:  They may appear crusty on the outside but they have a satisfying sweet-sour mixture throughout.

They are an acquired taste, if you can afford to acquire them.

I have known these fellows for some time.  Forty years ago when Larry and I were on the organizing committee to form the FBA, we needed a treasurer.  I asked Larry if he knew what double-entry bookkeeping was. He said he knew what a double set of books was.  I said, “close enough!” and we had ourselves a treasurer.

Chip later ran the FBA in the early ‘90s on his way to the presidency, and now Britt is treasurer.  I will say that since the Willy and Chamberlain folks have been in charge of our money, no has ever made-off with any of it.  They assure us that an audit of our bank accounts wouldn’t find anything.

One of my fond memories of Larry was the day he and Betsy came by my house over on Reeds Lake Blvd where I was raking leaves, and asked me if I wanted to join them later that day for a musical at the Broadway Theater Guild.  They had an extra ticket.

I asked them about the musical.  They said it was about a man who stole a loaf of bread and spent 19 years in prison.  Naturally, I assumed it was about one of Larry’s clients.

Then, when the convict is finally released on parole, he flees.  Now I am sure it is about one of Larry’s clients.

Larry said there is also a little girl in the story, who is abused by an innkeeper and his wife.

I was puzzled. “Where were the police?!”

Actually, he says, demonstrating his usual sang-froid, its OK because almost everyone dies in the end.

I was a little surprised this was considered a feel-good musical. But it was better than raking leaves.

I have known Chip even longer.  I used to walk by his house on my way to grade school.  Actually, Chip wasn’t born yet. But I knew that when he was born, he would become an outstanding lawyer like his father. He didn’t disappoint.

Chip started his law career clerking for Judge Miles. Miles’ hair had already turned white before Chip came into Chambers.  Which was fortunate.  While Miles had fought alongside Patton and Eisenhower in World War II, he had never ridden alongside Chip Chamberlain in a car.  The first time Chip was chauffeuring the judge, they got stopped by the State Police – after a high speed chase, as I recall – I think Wendell talked the officer out of arresting Chip on that occasion.

But the highlight came when Chip got Wendell lost in the vast northern woods of the Upper Peninsula.  One baloney sandwich between them and no GPS.  That was pretty scary, Winter coming on and all.  After that, Wendell’s secretary, Sylvia, called me to ask whether it was safe to have Chip around the elderly judge.  I assured her he came from solid Republican stock, and she had nothing to fear.

Not surprisingly, It was about that time Wendell started writing his memoirs.  Chip decided we needed to get his oral history instead, and this led to the formation of the Historical Society.

Well, when Larry and Chip formed Willey & Chamberlain LLP, they rapidly became the go-to guys for the serious criminal.  People say, if you are on the run, go to the Willey & Chamberlain Law firm.  (Or, in  short, if you have the runs, go to the WC.)  Criminals are known to call Tracy before committing crimes, just to make sure Larry and Chip are not on vacation, in case of an arrest.

In return, both attorneys are very circumspect, the epitome of discretion.  They never divulge confidences about their clients. They don’t try their cases before the TV cameras on the courthouse steps (unless Chip can position the camera near the sign outside the Lansing courthouse).  Instead, you can find them quietly talking to their clients over a Fat Boy Burger up on Plainfield.

I have always maintained that Willey & Chamberlain are like good orthodontists:  most of their best work is hidden from public view.  One can only speculate at how many latent felons and unindicted co-conspirators are roaming our streets today under our very noses, because Willey & Chamberlain helped them escape the gallows, so to speak.  Trump did not release as many felons into society.

Fortunately, WC only represents successful criminals, ones that can afford to pay.  Thus, there is some measure of justice in their exorbitant fees.  Whoever quotes the adage that ‘crime does not pay,’ has not met Willey & Chamberlain LLP.  They have definitely made crime pay.

Some of their cases, of course, are public.  I recall a couple of high-profile Willey & Chamberlain defendants that came into my court, on different occasions.  Both these men were born to go to prison.  One was a major fraudster, and the other a major drug dealer.  I am sure the AUSAs were salivating at the thought of these deserving fellows headed to the slammer.

But it didn’t happen!

Neither man went to prison.

They didn’t go to prison because each of them was shot and killed while their cases were pending.  This sometimes happens, and in all other respects, Larry and Chip could feel satisfied the cases were resolved.

All of which recalls to mind the ditty WC hires children to sing on the street corners:

upon which none can frown;

They calmly walk into court, and keep

The prison population down.”

Certainly a great first 25 years, and if crime continues (or some of their clients max out their prison terms) more to come!

[i] With apologies to Disney’s Mary Poppins.  Those wishing to hear the real lyrics should attend the East Grand Rapids High School production of Mary Poppins May 6-9, 2021.